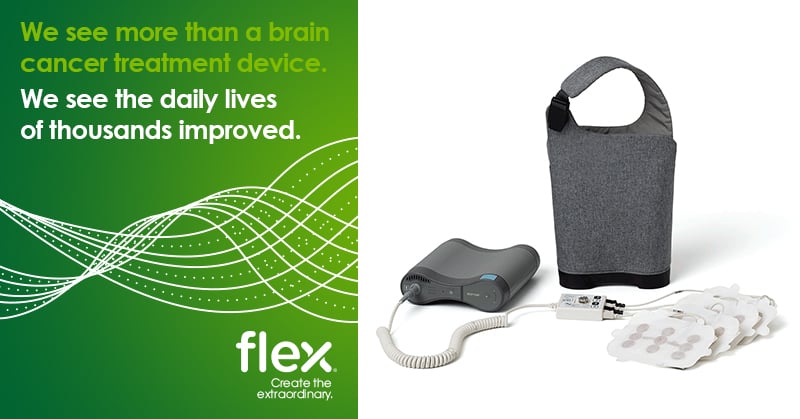 Novocure’s Optune is a portable medical device that treats glioblastoma, a type of brain cancer. The combination of Optune and post-surgical chemotherapy has been found to increase survival rates over post-surgical chemotherapy alone. After a decade of adoption and a growing patient base, the company wanted to make its treatment device more portable, practical and scalable for mass production. Flex proved to be an invaluable partner to make it happen. Read the full case study.

The first-generation Novocure Optune product was a breakthrough solution for treating an aggressive form of brain cancer. The wearable, portable device works by placing transducer arrays on the patient’s head and using them to deliver an electromagnetic field called TTF, or tumor treating field, to slow or even stop the growth of tumors. Since the device is worn throughout the day, it must be lightweight and energy efficient as well. The desire was to create a second-generation product that would improve the daily lives of patients with a more efficient treatment device that was smaller, lighter and easier to use. This new version also had to meet strict Class III, US Food and Drug Administration (FDA) approval.

Through their partnership with Flex, Novocure created a device half the size and weight of the original. Novocure developed moulds for the priority parts of the device such as the front panel and the latches for the battery compartment, leaning on the expertise of the Flex team who provided feedback on needed adjustments. Flex manufactured the transducer arrays, sourcing an additional production plant for Novocure’s existing product portfolio. Flex also introduced new automation capabilities to increase production levels, minimize scrap and leverage capabilities of the entire manufacturing team. "The commitment by Flex and its management team has been tremendous so there’s never a question about whether we are going to get the support that we need" said Mike Ambrogi, Chief Operating Officer at Novocure.

After the successful European trial, Novocure introduced the new device to their entire patient base. Working with Flex helped to ensure the development of a small, sleek, usable and highly efficient device. Novocure has experienced a year-on-year patient growth of 20-30%. This growth was made possible with the Flex partnership to design and scale manufacturing for the new generation Optune.

9 Human Factors Activities You Can Do Remotely

by Timothy Visich and Kate MacNamee